Which of the six Chinese painting principles is closely connected to calligraphy? 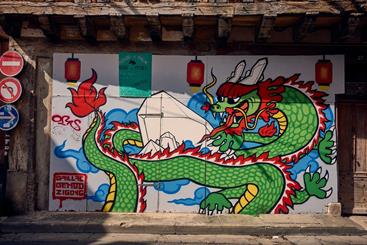 The six principles of Chinese painting is a book by the sixth-century Chinese critic, writer, and art historian Xie He. The name is pronounced as Hsieh He. To be very factual, ‘Six principles of Chinese painting’ is the preface to another of his book. It is titled ‘Gǔhuà Pǐnlù.’ The title can be translated into English as ‘The Record of the Classification of Old Painters.’

The basic tenets of Chinese painting were drawn from Gǔhuà Pǐnlù ever since its publication. The preface has a chapter called ‘Six points to consider when judging a painting.’ Contemporary artists and critics believed that these are the pearls of wisdom taken from ancient practices. They will define the quality and meaning of a painting.

The six principles as expounded by Xie He are listed below:

iii. Correspondence to the Object.

The nature of the Chinese alphabet is pictographs. That means writing a simple word in Chinese is artistic and corresponds to calligraphy. Chinese art is ingrained in calligraphy principles and evolved into its present state based on ancient principles. It is a Herculean task to eliminate any of the six principles as not related to calligraphy.

Let us now go deep into each of them and find out whether any of them relates to calligraphy.

The Principle Of Spirit Resonance

Definition: Experts in the methodology of Chinese art believe that resonance refers to the flow of creative energy from the artist to the canvas. The finished painting will resonate with this energy and that will distinguish it from the work of another artist. Xie He mentioned that there was no need even to glance at a work that did not resonate with the artist’s energy.

Relation with calligraphy: In a digital world the principle of spirit resonance does not have any relevance. Calligraphy is all about writing with a brush or a pen on a suitable surface. Outcome of the endeavor is beautiful content in a language for communication. The content might have been created by another person. The artist’s job was only to write it. This sequence of events does not provide for the flow of energy into the work.

Definition: It was mentioned above that the Chinese alphabet being pictograph in nature holds a lot of influence in the art of painting. Psychologists have developed the art of understanding personality by analyzing a person’s handwriting. It has developed into a science called graphology. Xie He in his book wrote that the way a person holds the brush to work on his or her canvas is very important. The way of holding the brush defines the outcome and mirrors the personality of the writer. It also has a huge impact on the brush strokes and texture of letters.

Correspondence to the Object

Definition: Artists use a model to create their paintings. It can be scenery from nature, an object, or a living being. There are many famous paintings in which birds and animals are depicted. Paintings created from human models have swept art lovers off their feet throughout time. Xie He placed a lot of importance on the accurateness of the final painting to the real life model used by the artist. The painting should have a very close resemblance to the shape of the model object. The lines should correspond well to make the observer aware of the connection with the actual object.

Relation with calligraphy: This Xie He principle of painting is closely connected to calligraphy. All fonts of calligraphy are well-defined with exact models. The writer paints the given content on a paper to reproduce the exact font. The lines and shapes of the outcome should not be different from the original font.

Definition: Xie He’s principles of painting are closely connected to calligraphy in many more ways than meets the eye. The fourth principle is known as ‘suitability to type,’ and defines the importance of the below factors:

i. The application of color: Color, the most important component of a painting is put to use by experienced artists to set the emotion and mood of the outcome.

ii. Layers of the painting: Artists use a base layer to create good texture and to focus on subtle distinctions of color.

iii. Value of the finished work: Do not mistake the term ‘value’ as the cost of the painting. Value is the way an artist depicts the lightness or darkness of a color.

iv. Tone: The difference in tone from value is very minute. It is the strength of the respective hue of a particular color. The color will have many tones and some have distinct names too.

Relation with calligraphy: This is the sole principle that holds the greatest connection to calligraphy. A particular font comes to life when the writer depicts its tones and values as much close as possible to the original. In fonts that require shading, the layer has much prominence.

Definition: If we are trying to find out which of xie he’s principles of painting is closely connected to calligraphy, then we need to understand the similarities in methodologies. A good painter will have a clear idea about the arrangement and placing of various objects on his or her canvas. This well-planned arrangement and placing should correlate with the actual composition. This principle accords great stature to space and depth that shall follow as the painting progresses.

Relation with calligraphy: All the ingredients of the principle of division and planning hold for calligraphy.

i. Placing and arrangement: The content is placed in straight lines as equally spaced rows. The rows are arranged parallel to each other.

ii. Composition: The composition of the work is well-defined and cannot be changed.

iii. Space and depth: Each word and each letter is placed with predefined exact spaces between them.

We can safely say that this principle is very closely connected to calligraphy.

Definition: The principle of ‘correspondence to the object,’ is all about maintaining a close resemblance to the models. The last among Xie He’s principles of painting that is closely connected to calligraphy derives its essence from the third principle. This allows artists to copy from works of past masters. A replica is not what is desired from this principle. It should be a remake with the artist’s distinct features that will enable a trained eye to recognize the person who painted it.

Relation with calligraphy: Calligraphy is all about recreating well-established fonts onto the paper for a given content. If someone asks, ‘which of Xie He’s principles of painting is closely connected to calligraphy?’ then this is the answer. If you are familiar with the calligraphy of a particular writer, then his or her works can be easily distinguished from another person’s. Both might have written the same content using the same font.

Serious students of painting refer to calligraphy and Chinese painting as sisters. It needs no further explanation to say that calligraphy much resembles art rather than a writing style. Much similar to a painting, the font used to create communication in calligraphy can convey the mood of the message. Many advertisements designers use this principle in their works to provide distinction to certain parts of the announcement. This makes it stand out and gets easily noticed by the reader.

A very distinctive feature of Chinese paintings is the intelligent use of lines, curves, and strokes. A great example is the twentieth-century painting by the Chinese artist Xu Beihong titled, ‘Galloping Horse.’ Even untrained eyes can recognize the close resemblance of the painting to calligraphic strokes and curves.

Which of Xie He’s Principles of Painting is Closely Connected to Calligraphy?

We discussed all the six principles in detail as outlined by the famous Chinese critic and writer. He wrote them in the preface to his book ‘The Record of the Classification of Old Painters.’

We can easily see that five of them have a very close attachment to calligraphy’s art and skill. We need to pinpoint one among the six principles to arrive at a definite conclusion.

Serious followers of calligraphy and the works of Xie He believed that the Bone Method holds the greatest connectivity between the two.Reason: The bone method defines the way the artist holds the brush. Calligraphy is impossible without holding a writing instrument. The way the writer holds the tool defines the outcome and the correlation with all the other principles that follow the bone method.