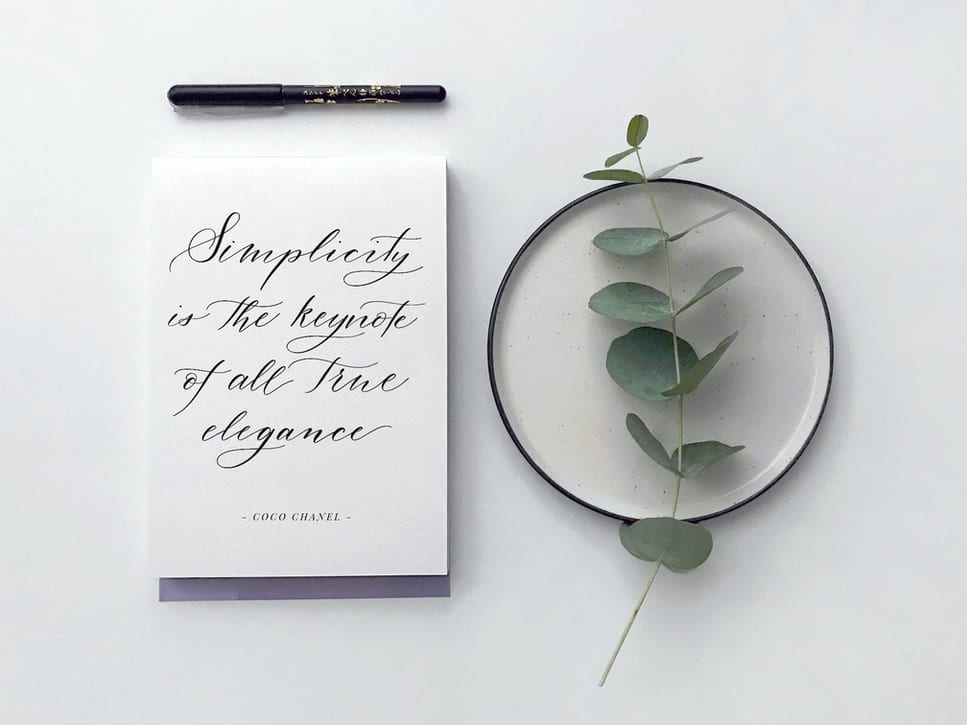 Calligraphy is the art of creating and presenting symbols in a manner that is aesthetically pleasing to the onlooker’s eye. Symbols here can be letters, words or even numbers- the building blocks of any language’s script. Witnessing a master calligrapher’s work is a visual delight akin to the pleasure of looking at an exquisite painting.

Calligraphy showcases an artist’s aesthetic treatment of a script. Through a very self- conscious application of skill, the calligrapher is able to design beautiful symbols. The skill of a calligrapher resides in the subtle hand maneuvers that allow for minute adjustments in touch and pressure. Experts have diagnosed a few significant elements that almost always need to come together to create an aesthetic piece of calligraphy. These are as follows: –

Integrity of a symbol is determined by how well proportioned it looks. One of the fundamentals of calligraphy is the study of the structure of calligraphic symbols. Focusing on integrity allows a calligrapher to understand symbols and re-create them in elegant shapes and forms.

The element harmony seeks to draw your attention towards the relationship the various symbols in a calligraphy piece share with each other. A good calligrapher is not satisfied with simply designing beautiful characters. These characters must share an equally beautiful relationship with each other. Just like individual musical notes need to come together in certain harmony to create a memorable song, similarly, individual symbols need to be arranged in a visually pleasing manner. Harmony in calligraphy highlights the broader vision of the artist.

Calligraphy has a rich history behind it. It is obvious in the shape and style of calligraphic symbols, as well as the substances and techniques used to create these symbols. Preserving this age-old heritage bestows the quality of ancestry in today’s calligraphy. Traditional methods like cutting an actual quill or sharpening a pen nib are but a way of preserving calligraphy’s beautiful heritage.

Rhythm refers to the presence of patterns and unique prominence each individual artist accords to their calligraphic writing. This bestows a refreshing individuality on each art piece. Calligraphy is a manually driven effort devoid of any machine interference. So, every calligrapher inevitably leaves a distinctly individual mark on the piece they create.

All four of these elements together possess the power to uplift any written word to a calligraphic masterpiece. Hence, describing calligraphy merely as ‘writing beautifully’ does not do any justice to this art form. Although calligraphic writing is undeniably beautiful, it also carries with it a lot of personality and creativity- giving it a much more complex flavor than a simple beautiful handwriting contains.

Some also equate calligraphy to the process of decorating letters. Using decorative materials like gold leaf, colors and pictures is quite common, but again, this practice does not encompass the rich disciple of calligraphy.

The Vast Heritage of Calligraphy

Almost every community in the world has, at some point, developed their own unique form of calligraphy either out of linguistic necessity or artistic need. The styles are varied and so are the techniques. Calligraphers of today understand and celebrate this shared heritage. It informs a lot of contemporary work. In fact, for beginners in this discipline, studying and copying historical calligraphy works is considered the best way to start. Even master calligraphers do not shy away from this approach considering it to be a great exercise in honing their craft.

The following section gives a brief tour around the different parts of the world where calligraphy flourished in breathtakingly varied original forms.

Western calligraphy came onto its own back in the 10th century. It could be differentiated from other forms of calligraphy by its strict rules and generous use of geometric patterns. Its most prominent use was in the Latin script, which was hugely popular in Rome. Uncial lettering was another style that originated from the Western tradition. It was used widely for copying the Bible and other religious hymns. As the Roman Empire slipped into the dark ages, these monasteries kept the uncial script alive through their religious work. Tools most commonly employed were the flat or round nib pen, brush, ink (usually water-based) and parchments.

This divine style of calligraphy evolved in tandem with the spread of Islam and the language of the Arabs. It reached its zenith during the Ottoman Era and is still considered to be one of the most beautiful styles. This calligraphy can commonly be seen inside mosque walls. It commands great respect and favor in the world of Islamic arts.

Places like India and Tibet have contributed to calligraphy their own unique styles. This distinctive South Asian calligraphy adorns many Buddhist texts and Tibetan prayer wheels. It is considered to be one of the oldest branches of calligraphy with some ancient calligraphic art set in stone found in India. Indian calligraphy is also known for the variety and creativity in their calligraphic tools- ranging from burnt mud and palm leaves to bark from the birch tree. East Asian calligraphy grew and flourished in countries like China and Japan. Each dynasty gave its own unique touch to these East Asian characters. These characters were designed in such a manner that each character stands for a particular word. The intricate strokes of these characters make for extremely elegant calligraphy pieces.

From the printing press to our modern-day computers, important technological milestones have inevitably dealt quite a blow to the discipline of calligraphy. However, it has not crushed the spirit of calligraphy. Far from it. Calligraphy has managed to re-invent itself to suit our current times. Today we get to experience some superb calligraphy through mediums like book covers, wedding invitations, certificates, movie props, maps and even court testimonials. Calligraphy has showcased much resilience and adaptability to keep thriving century after century.

How to Start Doing Calligraphy

If the rich history and varied styles of calligraphy have sparked an interest in you for the art form, then the following section will provide you with some helpful tips to start creating your own calligraphic art.

Calligraphy does not really require expensive tools to start with. A simple pen and paper will suffice. The nib of the pen can have several variations that are instrumental in creating varied styles. For example, a chisel nib makes for a highly elegant writing and since its tip is shaped like a wedge, it allows you to make both broad and narrow strokes.

On the other hand, a round nib comes with a greater variety of stroke widths and is also easier for beginners to write with. This is because you can position the round nib whichever way suits you best. But with the chisel nib, you need to ensure that the tip is always at a 45° angle.

Learning to Hold the Pen

Before you start calligraphic writing, you need to practice holding the pen. This might sound like a foolish thing to practice for, but in calligraphy, how you hold the pen determines the style and quality of your calligraphy piece. Most scripts will need you to hold your pen in such a way that the nib faces diagonally to the left. The angle can vary from 30 to 60°, depending on the script. Once you pick an angle, it must stay constant through the entire exercise. No matter how many curves you need to navigate the angle and direction of the nib must not change. Controlling the hand and thus the pen lies at the heart of calligraphy.

When you write normally, you tend to focus on the words rather than the individual letters. That’s how most of us write. But with calligraphy, your focus should, in fact, be on those individual letters. Once you start practicing these solitary letters, you will understand the different strokes that go into creating each letter. Calligraphy experts advise beginners to devote entire pages to practicing one stroke at a time to sharpen their skills.

Learn how to draw diagonal, vertical and horizontal lines with one another. Different styles of calligraphy employ these three lines in their own unique ways. For instance, Roman lettering is composed of very vertical lines, whereas italic calligraphy uses lines that are diagonal to the right.

The nib of the pen needs to move tenderly on the paper. Practice being gentle with the nib even when you are making backward or diagonal strokes. Pressure must be minimal for best results. If you start putting more pressure on the pen, then you might break the nib all together. Heavy pressure also diminishes the quality of the strokes, making the letters look ungraceful. The ideal way would be to not lean too heavily onto the paper. Position your hand in such a way that it just touches the paper slightly.

Equally important is the direction of the nib movement. The movement needs to start from the direction the nib is pointing to. If you force the nib to move forward, farther from your hand, then you risk tearing your paper and splotching your ink all over it.

In the right hands, these calligraphy instruments and techniques possess the ability to transform mere words or letters into pieces of art. Anyone can learn and become proficient in this craft. It just requires a bit of dedication, patience and a dash of artistic flair.